Where are we now?

There is a noticeable difference in the rates from 2018 to the rates in 2020 with rates seen to be decreasing in the last 2 years as a result of less shifts being made available. It has been reported that COVID-19 has caused a drop in demand of up to 70% for locums.

We predict that locum pharmacist rates will surge in 2021. As vaccination centres begin opening their doors, locum pharmacists will either be needed to administer the CV-19 vaccine or alternatively backfill for permanent staff delivering vaccines.This will inevitably increase demand and push rates up. We are already seeing this trend in early 2021.

How did we do it?

We were then able to break these findings down and look in detail at the average locum pharmacist rate by region (England, Wales, Scotland, and Northern Ireland) and by City (top 50 cities in the UK based on population). In the interest of complete accuracy, the below rates were taken from booked/worked shifts by locum pharmacists. Using this data gives a clear picture of supply and demand by region and city.

Let’s take a closer look into the data. The average rate across the whole of the UK was £20.50. In Northern Ireland it’s £18.35 per hour, in Scotland it’s £21.16 and in wales it’s £23.08. Surprisingly, Wales came out on top with an average rate of £23.08, which suggests that Wales has a smaller population of locums and that shifts in this region are harder to fill, thus driving up the locum rate.

Scotland's average rate was £21.16, this is in contrast to recent news articles that suggested rates in Scotland were soaring due to the shortage of locum pharmacists. But this average rate may be offset by typically densely populated areas such as Edinburgh and Glasgow, bringing the average rate down. This is reflected more clearly in the city break down. 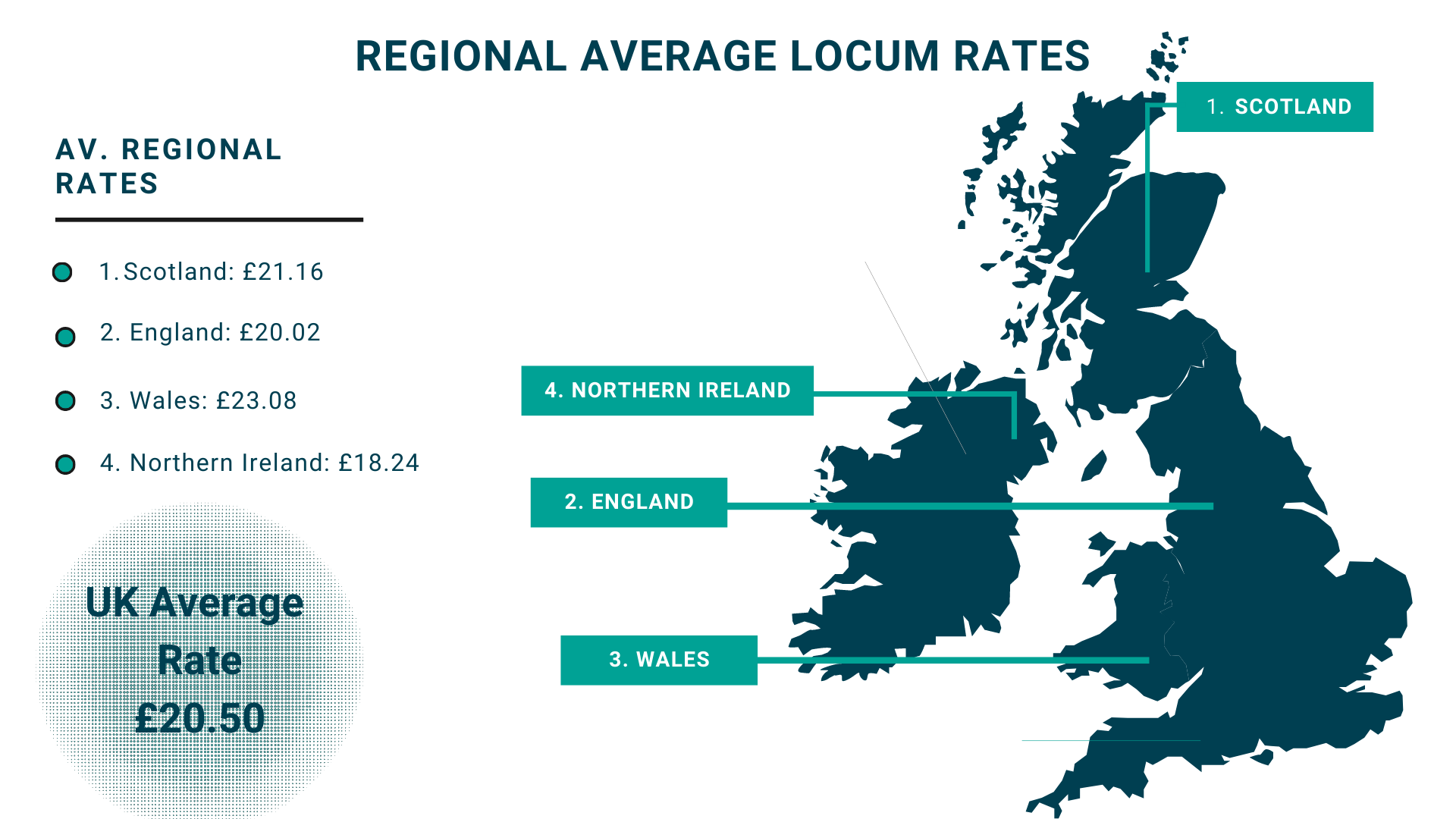 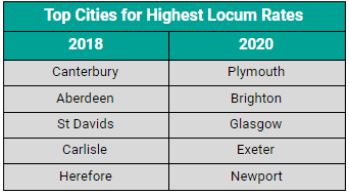 Fast Forward to 2020 and rates have improved in many areas across the country but have also decreased in many others. Our top highest average rate city was Plymouth which offered an average of £24.54 per hour. This was followed by Brighton at £24.42 and then Glasgow in Scotland which came in at an average of £22.75 per hour. Notably, key cities that offered the highest average rates were primarily in the South of England and Scotland.

There are many factors that dictate rates and can cause fluctuations. These are the factors that we believe will cause rates to surge in 2021. 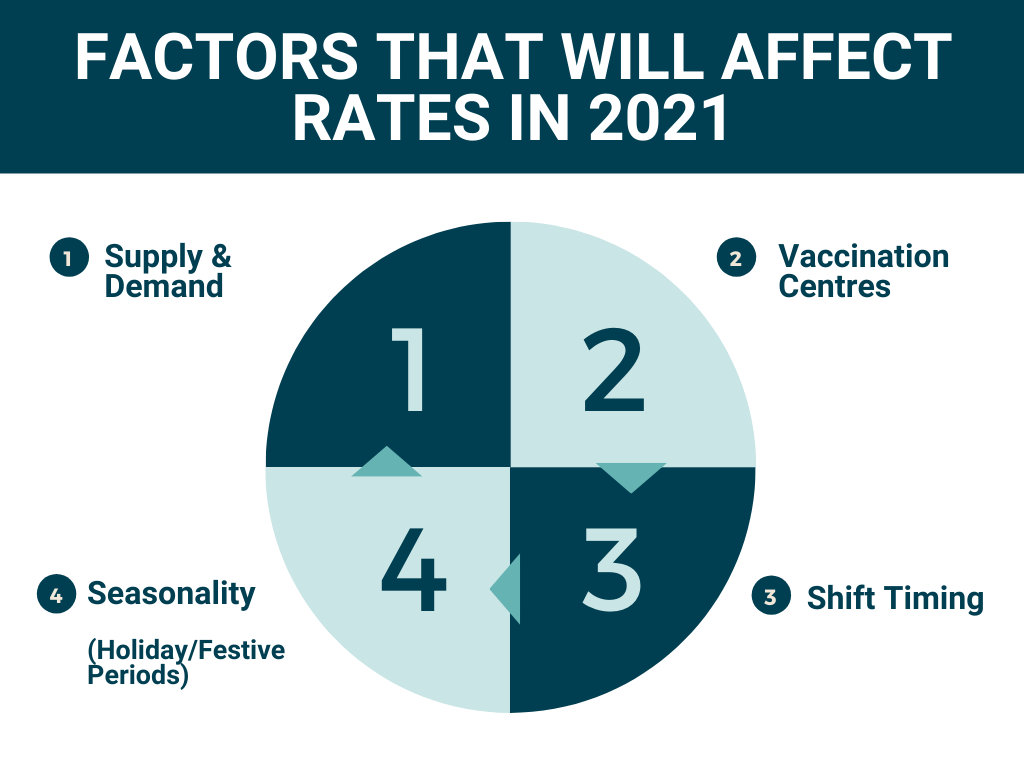 In 2020 demand for locums declined resulting in an overall decrease in hourly rates. At the beginning of the pandemic in March/April we could see an increase in shifts posted by employers onto our platform and a huge demand for locums but this dropped off as permanent staff stopped taking annual leave and holidays. Demand then decreased by 40% from April to June, compared to March 2020 figures, as travel was cancelled and footfall fell in pharmacies. In early September, we experienced an increase in posted locum shifts once again as a result of regular pharmacists having a backlog of holidays to take.

Additionally, The impact of vaccination centres will be vital in determining the rates in 2021. As pharmacists are being called to the frontline to administer the covid vaccine in vaccination centres, more shifts will become available to locum pharmacists to cover the footfall in pharmacies. Alternatively, locum pharmacists will be administering vaccinations and unable to cover full time pharmacy staff for annual leave, sickness or isolation. This increase in demand will naturally cause rates to increase. We can already see a huge increase in the demand for pharmacists since the beginning of January 2021.

Shift timing is another external key factor that can dictate rates. For example, weekend rates often tend to be higher with some pharmacists being unable to work weekends and full time pharmacy staff working 9-5 thus resulting in shift cover being needed from locums. Alongside this, late night rates always tend to be higher, with many full-time pharmacists having family commitments and being unable to work late evenings/nights. Emergencies (day/week of shift) are also always posted at a much higher rate than the average rate.

Seasonality is notorious for having a huge impact on locum pharmacist rates. CEO of Locate A Locum Jonathon Clarke commented, “Christmas Day has always been a highly paid shift time, for obvious reasons. In fact, it accounts for most of our high pay rate dates during the year, along with Christmas Eve and Boxing Day. Shifts during holidays in general are difficult to fill, such as during the summer when people go on holiday, so if you are hoping to earn a little extra as a locum this year, those are the days you should target.”

Looking at the full breakdown of data it is clear that the supply and demand of locum pharmacists has a huge impact on market rates by city and region. For example, in regions that are densely populated with locums such as Birmingham, the average rate is inevitably lower. There is no doubt that COVID-19 also had an impact on rates as the UK average has decreased by £1.55 in under two years. With fewer shifts available there was more competition between locums leading to the drop in the UK average rate. The key reasons why rates will increase in 2021 are as follows:

We predict that demand will increase and locum rates will increase. This will be down to vaccination centres opening and locum pharmacists being used to either administer the vaccine or to backfill shifts of regular pharmacists. We are already seeing this trend beginning of 2021.

It is intended that the mass vaccination programme implemented by the government will aim to vaccinate tens of millions of people before the year ends. The scale of vaccinations needing to be received coupled with the ability to establish enough vaccination centres and vaccinators will be challenging and intense for healthcare workers. There is no doubt that staff burnout is inevitable for permanent staff and for locums thus resulting in more demand and a surge in locum rates.

Are you wondering what the average rate in your city is? Look no further! We have put together a table containing all the information you need! Find your city below!